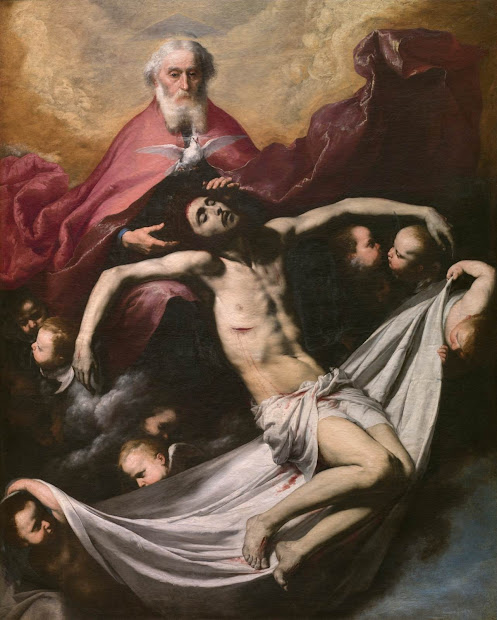 Now the eleven disciples went to Galilee, to the mountain to which Jesus had directed them. And when they saw him they worshipped him, but some doubted. And Jesus came and said to them, “All authority in heaven and on earth has been given to me. Go therefore and make disciples of all nations, baptizing them in the name of the Father and of the Son and of the Holy Spirit, teaching them to observe all that I have commanded you. And behold, I am with you always, to the end of the age.”

Antiphona ad introitum  Entrance Antiphon
Benedictus sit Deus Pater, Unigenitusque Dei Filius, Sanctus quoque Spiritus, quia fecit nobiscum misericordiam suam.
Blest be God the Father, and the Only Begotten Son of God, and also the Holy Spirit, for he has shown us his merciful love.
This is the Offertory Verse in the Traditional Latin Mass on Trinity Sunday.

Nine years ago at this time I gave a retreat to a group of Canossian Daughters of Charity in the Philippines. They included four novices and seven professed Sisters, including one from Malaysia. Their foundress, St Magdalene of Canossa bequeathed to the Sisters the mission of 'making Jesus known and loved above all'. This comes from a stance of standing at the foot of the Cross with Mary.

During my talks each morning I shared many stories of individuals who had made Jesus known to me, usually with no awareness that they were doing so. Some were persons I knew. Some are now dead. Some I met only once in passing, never learning their names. Most were poor. I know that my stories triggered off similar memories among the Sisters of people who had made Jesus known to them as the Sisters in turn had made him known to those they were serving.

I see this in the context of the Communion of Saints, the angels and saints in heaven, the members of the Church on earth, the souls in purgatory. The story of creation tells us that we are made in the image of God. But what the author of that first account of creation didn't know is that God is a Community of Three Persons. Made in God's image, we are made to be in community with others.

Continue on Bangor to Bobbio.