Centennial of the Legion of Mary, 7 September 2021 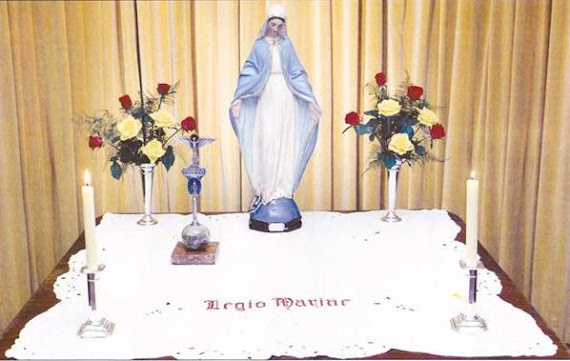 At the very first meeting of the Legion of Mary an altar just like that in the photo, except for the words 'Legio Mariae' and the Vexillum, the standard of the Legion, was used. Every meeting since then, at whatever level, has such an altar, with the Vexillum included.

The Legion of Mary held its first meeting on the evening of 7 September 1921 in Myra House, St Nicholas of Myra Parish, Francis Street, Dublin, under the name of the Association of Our Lady of Mercy that became the Legion of Mary in 1925. Present at that first meeting were Fr Michael Toher, Frank Duff, a 32-year-old civil servant, and a group of women, all young except for 64-year-old Mrs Elizabeth Kirwan, a widowed New Zealander and a nurse. She was appointed president of the group.

The website of the Legion of Mary states: The object of the Legion of Mary is the glory of God through the holiness of its members developed by prayer and active co-operation in Mary’s and the Church’s work. The unit of the Legion of Mary is called a praesidium, which holds a weekly meeting, where prayer is intermingled with reports and discussion. Persons who wish to join the Legion must apply for membership in a Praesidium. The Legion sees as its priority the spiritual and social welfare of each individual. The members participate in the life of the parish through visitation of families, the sick, both in their homes and in hospitals and through collaboration in every apostolic and missionary undertaking sponsored by the parish. Every legionary is required to carry out a weekly apostolic work in the spirit of faith and in union with Mary.

Continue at Bangor to Bobbio.